The quickest way deals get around these days when it comes to kid’s activities is social media. Saw a post in the JBR Mums Dubai FB group (credits entirely to Kristel!), a hunt through instagram, a couple of emails and phone call later, we got ourselves and the girls to the newly opened Oompa Loompa at The Beach in JBR this afternoon. Kids Chocolate Masterclass for the 3.5 year old – kids in Dubai are pretty lucky, isn’t it 🙂

I was quite impressed with the interior – a restaurant created primarily it seems for chocolate lovers and families with children – tick, tick! Our girl joined in the rest of the group for the class – where two very enthusiastic ladies explained to them how chocolate was made, and the kids got to pour (with assistance, for the younger ones) the chocolate into a mould of their choice. Whilst the chocolate was cooled, the ladies entertained the little ones with lots of dancing and music, it was a proper party! My friend and I also managed to join in the fun – I made a little gingerbreadman chocolate, hee hee. 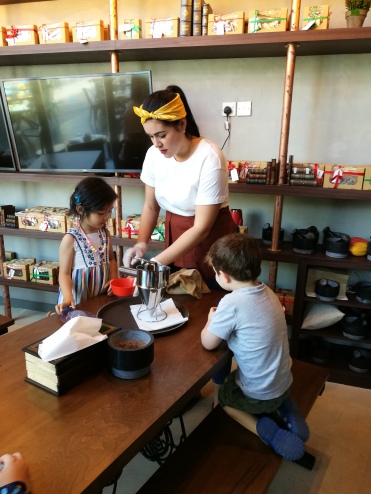 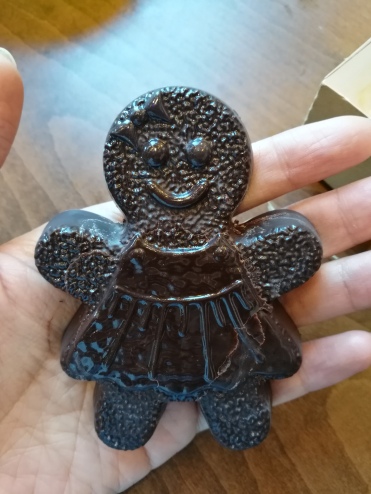 The surprise part was – it was actually so good. It wasn’t actually sweet, just really good chocolate (not that I know much about chocolate)… but it surely tasted so. They had explained it was of Schoko Fabrik brand, a bit of googling later on – realised that this was a German brand – surely it is a famous one? Gotta be my favourite chocolate brand now! I could easily eat the entire Gingerbreadman-chocolate all by myself!

We had gone with another family, so we stayed on for lunch. They only have a ‘soft opening’ menu so I suppose the content and prices would change later on. Prices are very reasonable – with mains like the salmon udon at 50AED. That said, the portion did reflect the price. A bit disappointed that it was way too salty (too much soy sauce/hoisin sauce?) – with a very small portion of noodles, so I had informed the staff the same and they very nicely added a bit more noodles. Didn’t really do too much as the broccoli was already drenched in it, but hey – let’s cut them some slack I guess – it is a ‘soft opening’!  The chicken breast with polenta and morilles sauce however was much better – also priced at 50 AED.

Food aside, my latte was good – reasonably priced at 20AED and I’m hoping they would keep it that way. A scan through their soft opening menu – classic crepes were priced at 10 AED, waffles at 15 AED with toppings priced separately. Very well-priced, isn’t it? Keen to try it out next time and see for ourselves how the rest of the menu fares.

So yes – as an overall, I would return. For the play area – a proper 3-4 storey soft play gym for the older kids, and then on the side a soft-play area for the younger ones. The artwork on the walls were spectacular. What I would like to see improve when we come back next? The savoury food itself. This would be a regular spot for our family and for playdates, and definitely will be a hit with those in this neighbourhood 😉

Much thanks to the team for a fab kids chocolate masterclass! It was complimentary to the public as they had only started it (third day doing this) and I’m glad I caught the FB post from Kristel! I can see it being a great spot for birthday parties as well…. 😉

Note : The Kids Chocolate Masterclass was complimentary to all who signed up as it was a new thing they were doing. We did pay for our lunch at Oompa Loompa.