Honestly, I don’t know what to believe 🙂 Half the time I’m thinking, really? The other half thinking, maybe?

Were you there? What did you think?

Regardless, we had such a great time laughing our heads off. It was entertaining as hell.

So on Monday, I got into my car afterwork and got a message from a friend.  They were at Level 41 in Media One Hotel for the hypnosis show and asked if I was closeby. Well not really, but I could be there in about 20 minutes or so. So off I went to join them 😉

We spent the next two hours or so, absolutely cracking up.

I didn’t even know that the Radio 1 crew was gonna be there. We were chatting away, and then from the corner I heard a voice that sounded so much like Sheena from The Sheena Show. Looked over and there she was!! * Tells self to stay in seat, don’t look like a dumb dumb and run over, he he * Few moments later, Surina Kelly appeared, then Danny Cee. When Dave Crane asked for volunteers most of them went up, and it was then I finally knew who Pipilover was. Producer Preetam, I am now your newfound fan. You are so funny. So adorable. You dance like a superstar 🙂

So look, suggest you check it out for something different. The show ends for Ramadan but will carry on after. Let me know what you think about it 😉 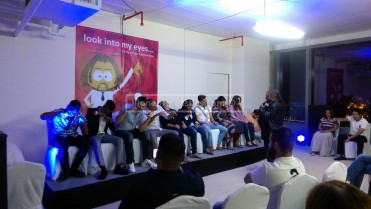 PS – My lil gnome competition on Instagram ends just before Ramadan – find him at Garden on 8 to win dinner for two, before it’s too late!

Kokobay serves breakfast now, every weekend from 8am onwards 🍳🌞🌴
Did not know that there was more to the @dubaiaquarium than.......the aquarium itself 🐟🐠🐡
So if you wanted to bring the little ones for a treat up the Burj Khalifa, stay for coffee or breakfast at @atmospheredubai instead of doing "At the Top", you could ☕🍳👦🏻👧🏻
Chef Michael Mina is here at @minabrasseriedubai till Friday 🤗 Drop by if you want to see him, have a chat with him or simply try out the chef's cooking 😋