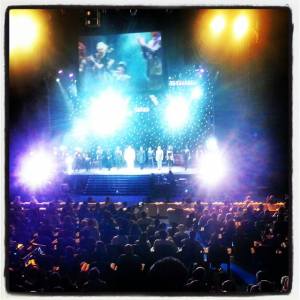 Don’t we all love a little big of magic.

R and I went to the opening show of The Illusionists on Wednesday night, held in World Trade Centre. It was such a good show 🙂

My favourite will probably be The Trickster – which I initially found quite annoying but then grown to absolutely adore. His antics make you laugh your head off. If you were sitting near row N and there were two girls being real loud, that’s us 😀 No apologies!

Then there was The Inventor, who did tricks that made you felt like a little girl again. I felt like I was in Enid Blyton all over again. Isn’t that amazing

I loved the song that was used when The Gentleman did his ball tricks – what was it? And The Enchantress’ voice is just mesmerizing. Beautiful, as well. You know you watch all these tricks in movies and tv and you always wonder, how the heck? And then you see it in real life and you’re still thinking, how the heck? 🙂

The goth Anti-conjuror and last pigeon show. Wow. The finale of The Mentalists’ stint gave me goosebumps. And you’ll always have the Houdini guy, The Escapologist – which made us nervous as hell!

Would I recommend it? Yes yes yes. I love magic. It was different, and beautifully done. And The Trickster made sense to the overused world ‘lol’. You know it’s good when you can’t stop laughing 😀

Kokobay serves breakfast now, every weekend from 8am onwards 🍳🌞🌴
Did not know that there was more to the @dubaiaquarium than.......the aquarium itself 🐟🐠🐡
So if you wanted to bring the little ones for a treat up the Burj Khalifa, stay for coffee or breakfast at @atmospheredubai instead of doing "At the Top", you could ☕🍳👦🏻👧🏻
Chef Michael Mina is here at @minabrasseriedubai till Friday 🤗 Drop by if you want to see him, have a chat with him or simply try out the chef's cooking 😋