March 2016 update : Looks like they’ve finally lifted the ban 🙂 Not too sure if our many phonecalls, emails to Emaar and RTA, and continuous social media posts did anything but we would very much like to think it did 🙂 Victory to the residents! Link to update here.

I’m honestly getting bored of talking about it. But it’s there, and it’s not going anywhere unless we do something about it.

As I sit here typing I can hear frustrated drivers honking. Lucky enough for us we live a little further than where all the traffic piles up, so the noise isn’t all in your face. Similarly, the left turn and u-turn closures does not impact our commute to and from work too drastically. However, I can only imagine the pain a lot of other residents have to go through. 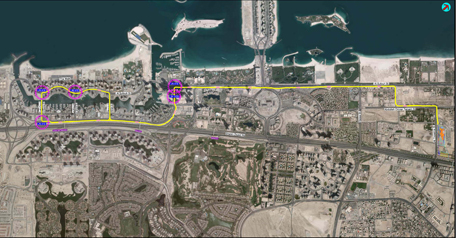 Read the comments under the 7DaysUAE letter here. The feedback from all residents goes on, check out all the comments dated January 2nd on RTA’s facebook page here. It’s so bad there has been a twitter profile created (@DXB_Marina) which captures the nightmare we have all have to endured, with youtube videos of traffic.

The impact of these road closures are all evident above. I’m not going to dwell on it.

What annoys me the most is that RTA has supposedly quote “ conducted a comprehensive study through a specialist international consultancy firm to assess the current situation as regards the overlapping tram and vehicular traffic at six junctions at the Marina and the JBR. Based on the findings of the study….. ” Unquote.

Can someone tell me which engineering consultancy firm decided that it was better to create havoc for everyone in the marina? Does any of those engineers live in the marina? Was this study even done?

I called RTA’s hotline today (800 90 90) and spoke to a lady. I told her I’ve just returned from a holiday and found out a lot of roads have been closed, is this permanent or temporary? She told me, “It’s temporary.”

When will it be removed?

It will be removed soon. (No further explanation)

Suggestion : Get someone who actually knows what’s happening to work behind RTA’s customer service. This is not temporary, or is it, RTA?

The funniest one was RTA’s response to a comment on twitter, stating that the traffic in the marina is Emaar Properties‘s complete responsibility. I don’t think they will be very happy to hear that. 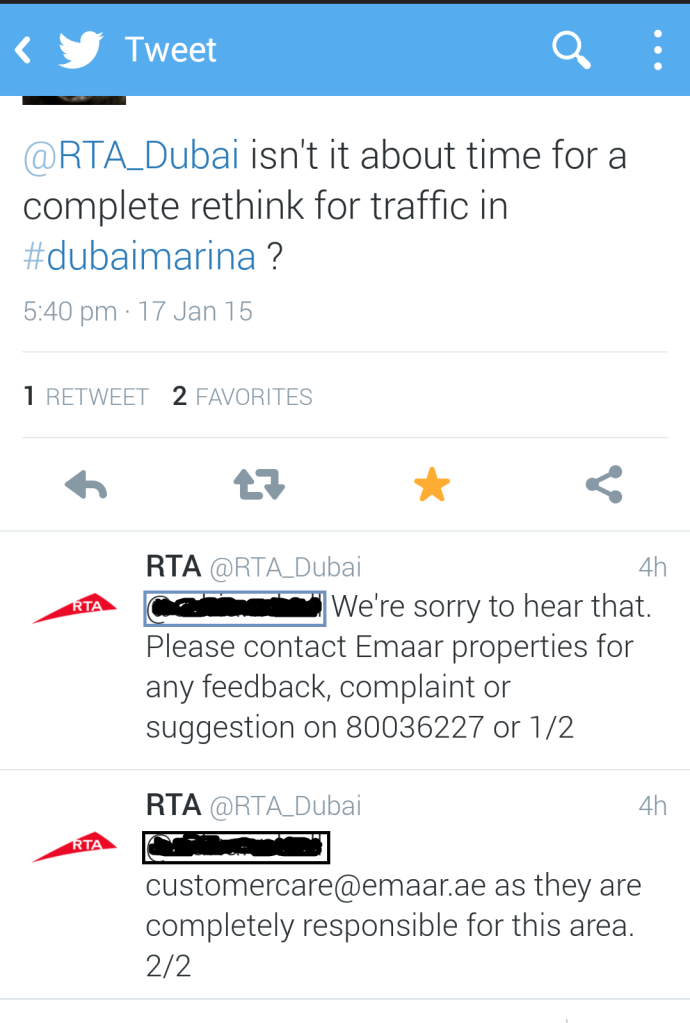 So I thought I’ll give Emaar a call, and mentioned to them about the problem and that RTA has directed us to speak to Emaar as apparently they were the ones responsible for the traffic in the area. So RTA supposedly has nothing to do with the road closures and are not able to do anything, unless Emaar tells them to? Implying that the decision to close the left turns and U-turns was Emaar’s decision?

I asked the guy at Emaar and he said that they have nothing to do with the road closures, and that it was RTA’s responsibility. I can’t imagine a reputable company such as Emaar would have made such a ridiculous decision.

[Update, 15th Feb. Emaar has finally gone active on twitter and responded to the above. Lol. “Concerned authorities” i.e RTA?]

What can we do?

RTA is not going to do anything if we tweet them every hour. Not to say that we should stop though, I’m all in with that 😉 We can complain as much as we want on social media, but I doubt the people who make decisions will check out twitter feeds or scroll through facebook comments.

What the guy on the phone in Emaar suggested is, as residents in their development, we can write in and explain what we have had to endure and the impact these has on our everyday lives . What I also suggest is, if the following is true, you tell them how this is going to be extremely unbeneficial to their development because residents are unhappy and are considering moving out.

I’m not sure if it works just writing to your building manager, probably just write in to them, as well as the property developers.

Now, please do that, and keep up with the social media updates as well!

As a lot of people have suggested, instead of completely closing the left turn and U-turn, and since there are a lot of idiots on the road who don’t understand what it means when the lights go red, you can :

a) Install a physical barrier which will hopefully stop idiots from crashing into the tram. There’s the carpark barrier, and then there’s the automated posts that come up vertically from the ground (someone please tell me what this is called)

If people decide to ram into these barriers, please take them off the road.

b) Just place policeman on these intersections (as you have done in the last few weeks!) and if anyone decides to run a red light, give them a hefty fine! At some point, people will realise that red means stop and tram means “do not crash into it?”

Any other suggestions, let me know.