This I’ll say. It’s pretty, it’s very pretty. We had a great time. However, food was just – alright. Here’s a detailed take on what we got for 200AED (for two, with the Entertainer 😉 ) 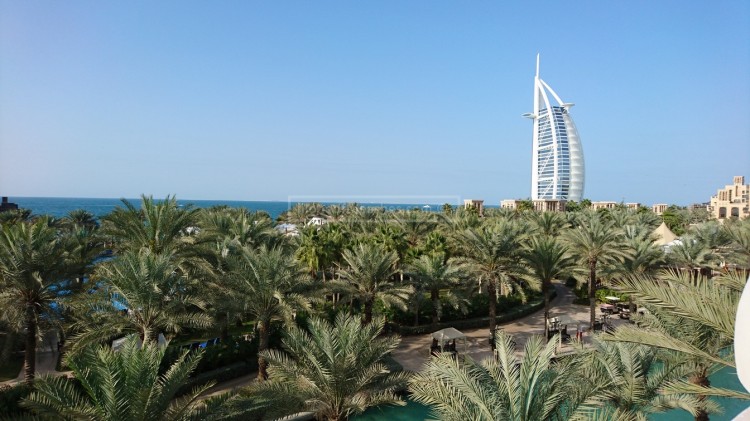 Now you wouldn’t mind sitting outside to a view like this for a few hours, would ya 🙂 Especially at this time of the year. You can choose to sit indoors but hey, it’s January in Dubai. Who sits indoors now? 🙂

Our honest take, was that the sandwiches were pretty average. 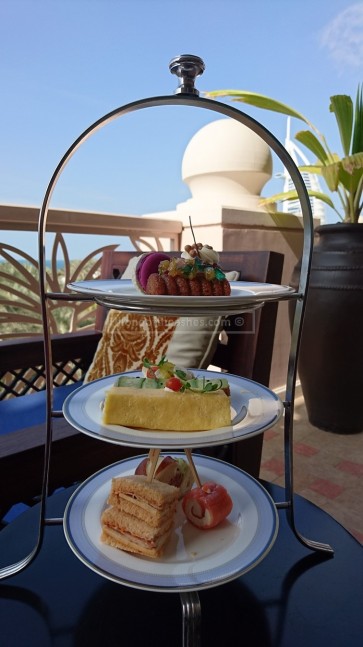 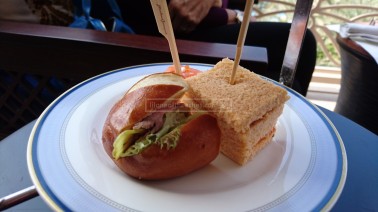 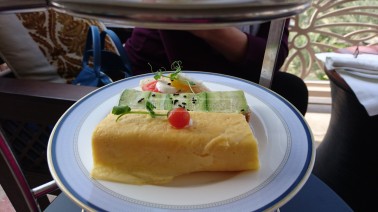 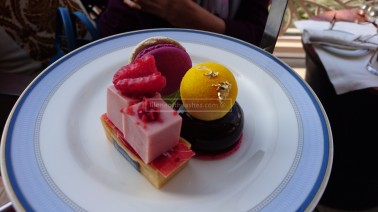 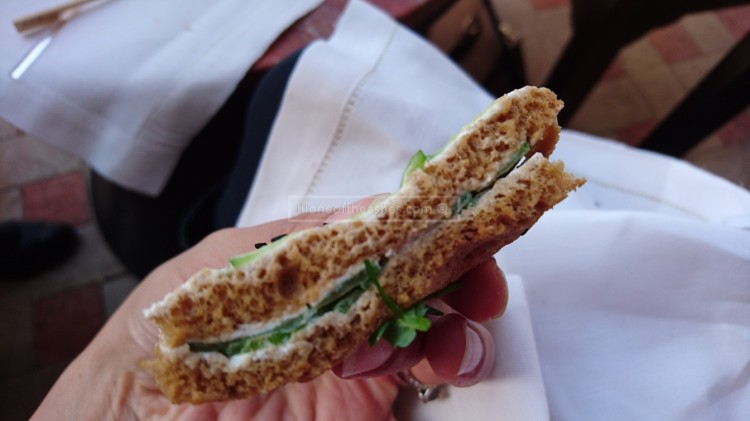 A little similar to the afternoon tea in Al Samar Lounge, we had little trays of sandwiches on a silver tier. Simple egg-rolled wrapped, sliced cucumber sandwiches which ended up really soggy, even the ham and cheese sandwich was really dry. Something that I really hope they can step up on as we were both a little disappointed, and was just eating it because we didn’t want to waste food!

This, we liked 🙂 Wasn’t exceptional I’ll say but how wrong can you go with hot scones with a selection of creams! Devonshire clotted creams, lemon curd, strawberry jam, mmm. 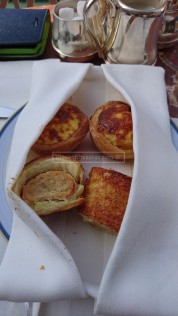 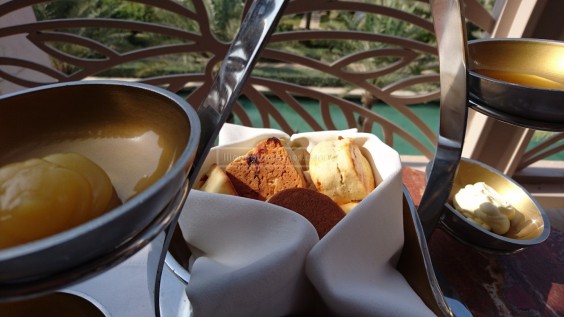 d) Selection of fruits and sweets with a chocolate fondue

And just when you can’t eat anymore, here comes dessert. We didn’t touch any of the sweets because we couldn’t stomach anymore. We just ate up all the fruit 🙂 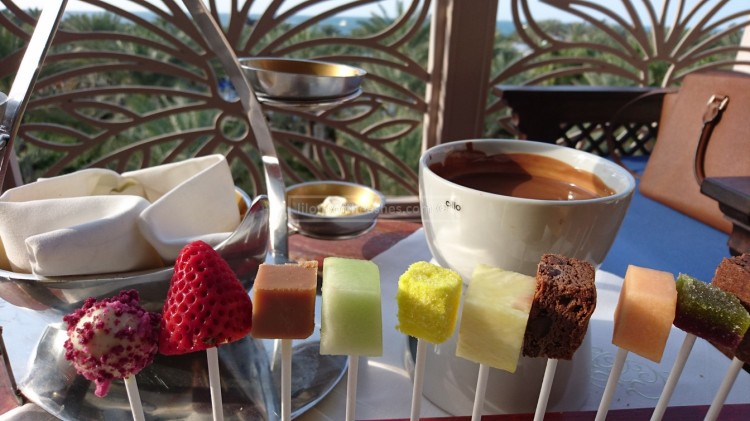 Al Fayrooz has an extensive selection of tea and coffee. Mum and I started with the heavier of the lot, latte and mocha, ending with a pot of black and hibiscus tea for mum and rooibos for me. 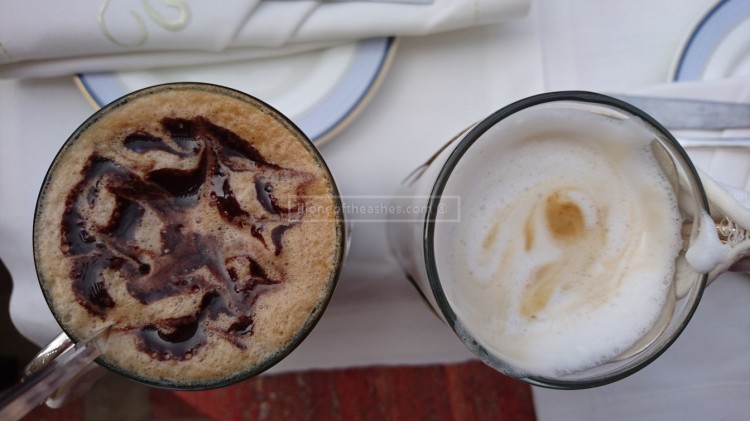 Wasn’t up to par.

I had made a reservation through email and asked twice what time does afternoon tea normally happen, and was not told, so I just booked for 2pm. I figured we’ll just get there early but when I arrived at 1:30pm, the lady told me afternoon tea only started at 2pm.

Service was fairly slow that day. I had to walk inside to the counter to ask for the tea which only came much later. Did the same thing with the desserts as well. Hmm

As always, we had a great afternoon 🙂 So, despite the little hiccups, it didn’t ruin the afternoon at all. It’s a beautiful setting, worthy of a million photos, and we were full. I guess it would have been good if the food was a bit better in quality, and if they could keep an eye on service as well. It’s Jumeirah, we had expected more.

For 200 AED for two (thank goodness for vouches), it was money well spent. Had I paid full price for it, I wouldn’t have been very happy at all 😉

Possibly the only time we can afford to stay in an Over the water villa at @anantaradubai 💕 used up my Airmiles! Isolation staycation with the little ones. Breakfast served to villa, the girls can attempt to feed the fishes, scoot and run around the grounds (which is really empty btw...).....just a change of scenery from our apartment 🙈 Not a lot of options.... when you can't/shouldn't bring little ones to the malls or restaurants now isn't it. Stay safe (and sane) everyone 🙏☺
Pancakes taste better when you can eat it in peace... well, for a few minutes at least ☺ Weather's cool enough to sit by the outdoor play area at @jonesuae in @thedubaimall now. Between 9-11am at least 🙈 Nice to get there early when there's lots of parking, mall is empty so kids can run around, and.... jones is in the entertainer as well for breakfast! Back to alfresco dining now! Didn't get around ordering babycinos this time, have you guys done so here? What's your favourite restaurants to dine in Dubai mall with kids? #jonesuae #dubaiwithkids #dubaipancakes
Lots of street food and foodcourt lunches over the last week. First trip without the kids, joining mum and dad in Bangkok 🌴🌺😂 . If you're here solely for shopping and food, recommend to base yourself in Pratunam. The @novotelbangkokplatinum was perfect for us as it's interconnected to the malls and then linked through overhead bridges to other spots 💕 . Pictured, Tom yam prawn noodle soup 🍜 Yum yum yum 😋👍Lucky for us it was the food festival so tons of stalls set up outside the hotel and all over. Lots of pad thai, sticky rice and mango, fresh coconut, chicken feet thai papaya salad, kueh chap, fried oyster crispy pancake & water chestnut with shaved ice, etc etc etc... hehe. Might find time to do a mini piece on the blog..🌼 . Where do you normally stay when you go to Bangkok? #bangkok #novotelbangkok #tomyumsoup #thaifood
Pool evenings at the Anantara with the little ones with Privilee🌴💕 . Half of the main pool is only 0.6m deep, perfect for the toddlers to play around in. There's a shaded kid's pool as well if you're here early 😉 . More tips - dine at Crescendo after a swim, they take the Entertainer for their buffet (230aed pp) plus there's a kid's play area in the corner! Sat is South East Asian night 🍹 . Summer membership coming to an end soon - to renew or not to renew? 😎 #anantaradubai #privilee #privileewithkids